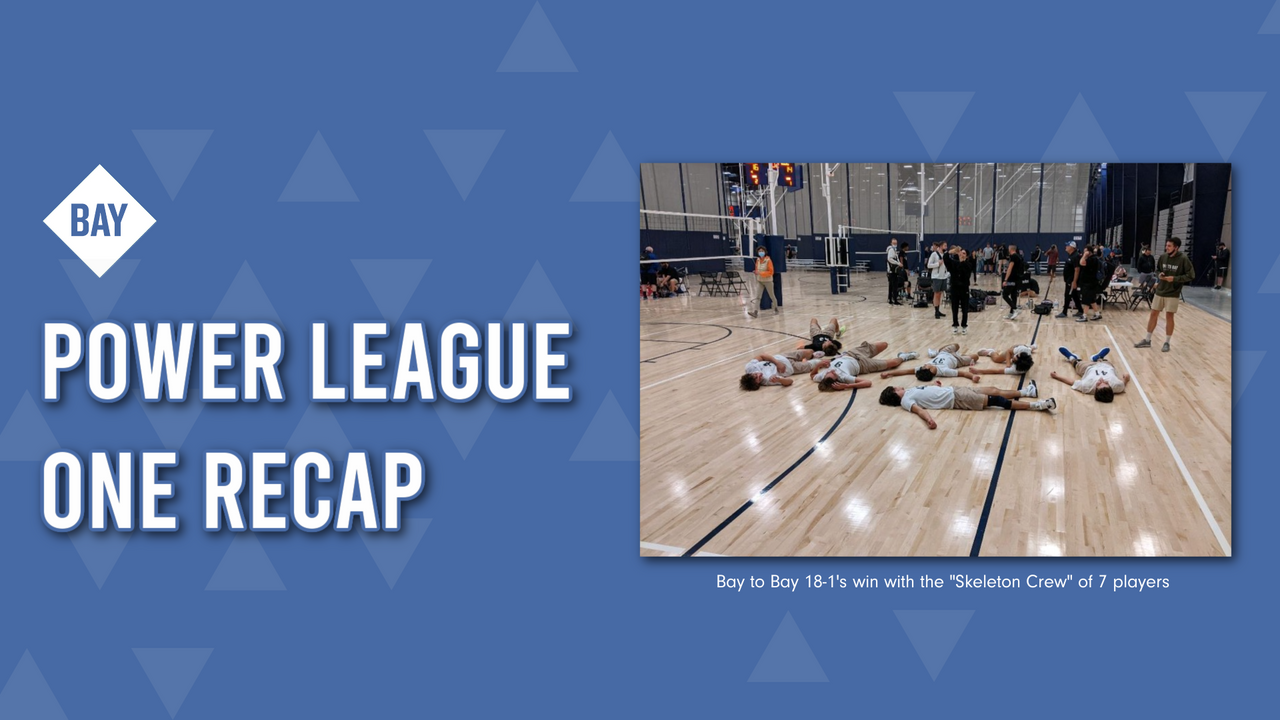 It was a great weekend for the club at the Grounds in Roseville. We had one tournament champion and 8 teams finish in the top 5 of their respective brackets. Check out how all of the Bay to Bay teams fared over the weekend below:

Bay to Bay 18-1: Due to multiple members of the team being on official recruiting visits over the past weekend the 18-1's played the tournament with only 7 athletes. With zero substitutions, the "Skeleton Crew" played every single point of the tournament and through an impressive showing of ball control, grit, and endurance were able to go undefeated and win Power League 1. Instead of celebrating, the boys laid on the floor and caught their breath: 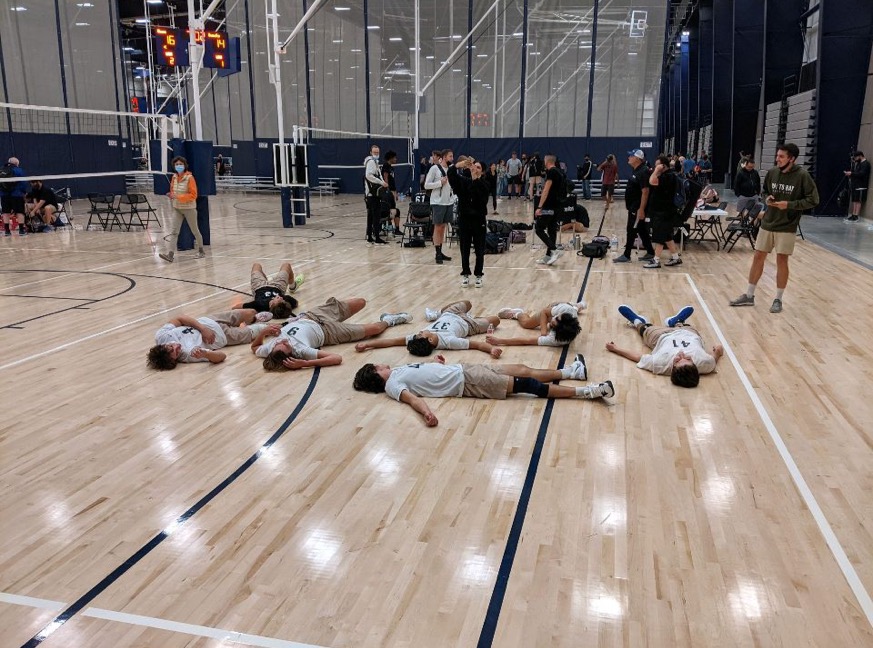 Bay to Bay 18-Premier: Coach Mark's squad put together an impressive showing going 4-1 to earn promotion into the Bronze division. Their only loss was a forfeit when half of the team needed to leave early to get home for their Homecoming dance.

Bay to Bay 17-Premier: Coach Josh and John's team went 1-3 on the weekend playing in the all Bay to Bay pool in the morning. They lost to the 17-1's and the 16-1's which moved them into the Challengers bracket where they lost a matchup with MVVC 18 Black. The boys finished the day out on a strong note, defeating Academy 18's in straight sets.

Bay to Bay 17-Club: During Power League 1, Coach Lavelle and Andrew's team was the most fun team to watch in the gym. The boys were playing with so much energy, enthusiasm, and cohesiveness you can't help but stop and take in a few points any time you walk by. Deservedly, the boys from 17-Club went 3-1 and earned promotion into the Gold division for Power League 2.

Bay to Bay 16-1: Coach Frank and Allie's squad rounded out the top-5 in the 18's division this past weekend with strong wins over the 17-Premier and Apache 17's teams. It was a great team effort with multiple players mixing up their roles and playing in different positions and situations.

Bay to Bay 16-Premier: Coach Ryan and Colton's squad had a great showing on the weekend, going 4-1 with multiple barn burner matches in the 18's division. After sweeping their morning pool, the boys lost their first bracket match (25-23, 19-25, 12-15) which precluded them from promotion into Silver. Nonetheless, the boys finished out super strong with two more wins over 17's teams (Roseville and PacRim).

Bay to Bay 16-Club: Coach Zac and Nick's team swept through the Silver division this weekend going undefeated and earning promotion into the Gold division for Power League 2. The boys continue to elevate their play each week and are great representations of the club, continually cheering for other Bay to Bay teams when they are off.

Bay to Bay 15-1: Coach Chad and Javi's team went undefeated in the Silver bracket of the 18's division and earned promotion into the Gold division for Power League #2. It was an impressive showing with each player contributing to the 5-0 record. Next up, the 15-1's will be in a morning pool with PacRim and NCVC 18's.

Bay to Bay 15-Club: Coach Erin and Luke's squad lost a super tight matchup in their first game of the day against Fresno 16's (16-26, 25-15, 14-16). From there, they lost their next three matches of the day and will move into the Bronze division. Coach Erin said it was a good learning weekend for the boys as they came out strong in the first set of their matches but were unable to carry that energy through the course of a whole match.

Bay to Bay 14-1: Coach Arielle and Matt's team went 4-1 on the weekend and earned promotion into the Gold division of 16's Power League. During a break in play, the 14-1's and 15-Premier team had an epic rock paper scissors battle in which the 14-1's won which was definitely the deciding factor in the actual volleyball match that they played 😉.

Bay to Bay 14-Premier: Coach BJ and Sarah's squad went 2-2 on the weekend with quality wins over MVVC 14 National and UC Elite. After splitting their morning pool, the 14-Premier team moved into bracket play where they lost to a scrappy SF Elite team in the quarterfinals but rebounded with a nice team win over UC Elite to finish out their day.

Bay to Bay 13-1: Coach Arin and Pin-Joe's team battled their way through the Silver bracket to earn promotion into the Gold division for Power League #2. The boys went 3-2 on the weekend, winning the right matches to earn their way up against the 14-under teams.

Bay to Bay 13-Premier: Coach Jon and Brendan's team got their first big win of the season, taking down 650 Extreme 13's in bracket play before losing a super close match with MVVC 14-Hole (22-25, 24-26). The boys will look to carry that momentum into training these next two weeks.

Bay to Bay 12-1: Coach Mason and Freddy's team took some huge strides this week finishing 2nd in the 12's division. The boys went 3-2 on the weekend, both losses coming in three sets to eventual winner Academy. Make sure to go check out the young guns whenever you get a chance, it is guaranteed to bring a smile to your face 🤗